Designing an Immersive multi-projector projection setup is a very complicated task. A dozen questions to be answered to make a decision for the projection screen and the projectors.

One of the most often mistakes that one can be made into buying the projectors and building the screens, just to find out that the setup is not optimal or even worse, the setup is not working.
A careful plan and design phase is needed creating a multi-projector setup on a non-planar projection surfaces. Usually, several iteration steps are needed that include the following steps: plan, design, evaluate, decide, plan, decide, evaluate, …. It is all about making rational choices and compromises based on weighted tradeoffs.
We at Fly Elise-ng offer users the program Immersive Designer PRO to design and evaluate their setups themselves. Users need to understand the basic principles of projection on irregular surfaces and have to be prepared to make compromises in their choices for screen and projectors.
So, walk through the several “plan, design, evaluate, decide” steps needed to come up to the most optimal multi-projector setup.
One of the first decisions that one has to make is the type and of the screen. Fixing one of the variables in the setup will make us focus and evaluate how other variables (ex. projectors) will influence and fit into the setup. we would like to create a cylindrical screen projection with height of 2.0 meters, of 2.3 meters and screen angle of 220 deg. Those seem common dimension for a simulation setups. 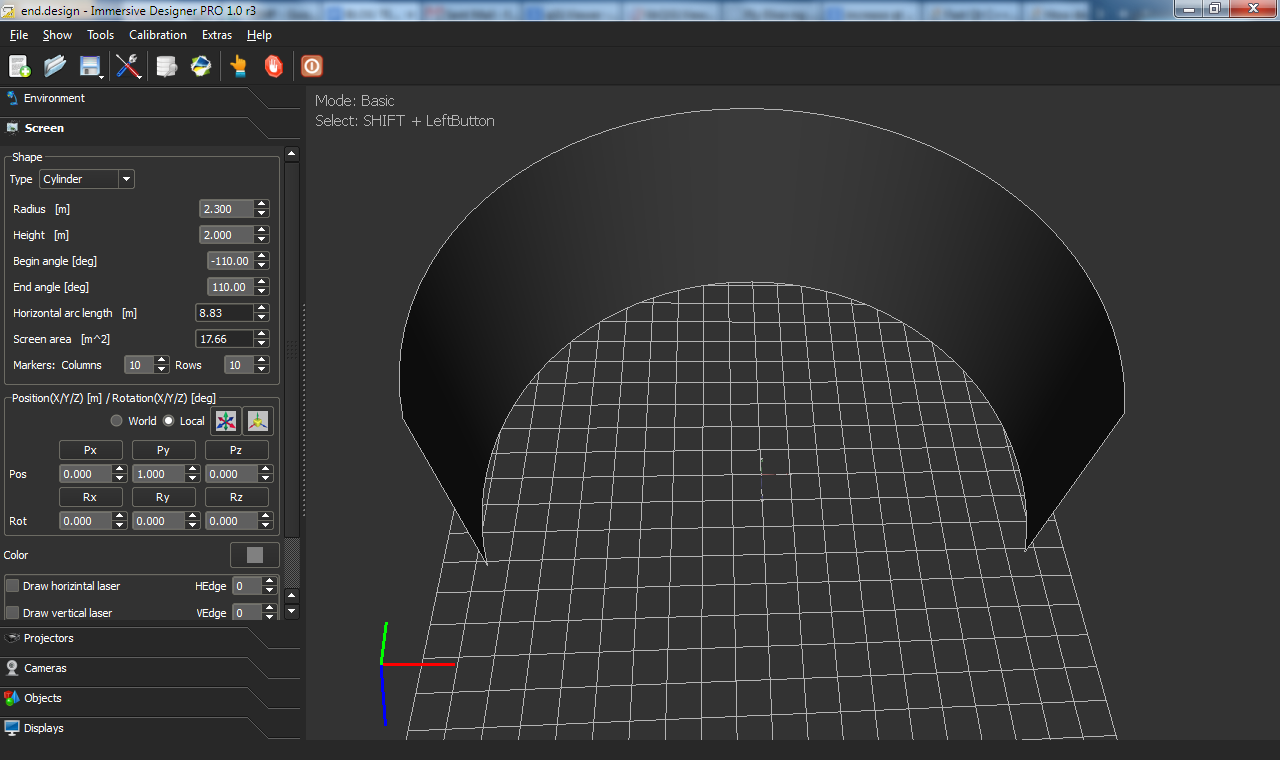 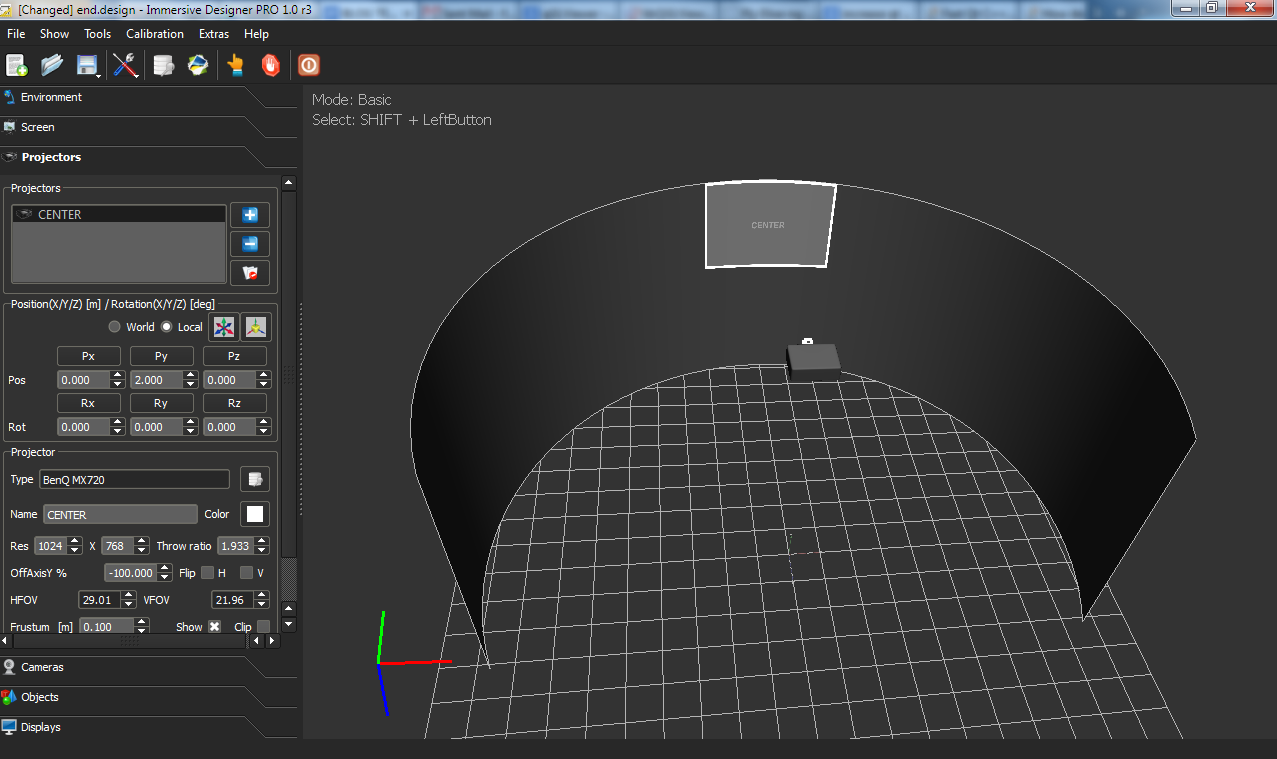 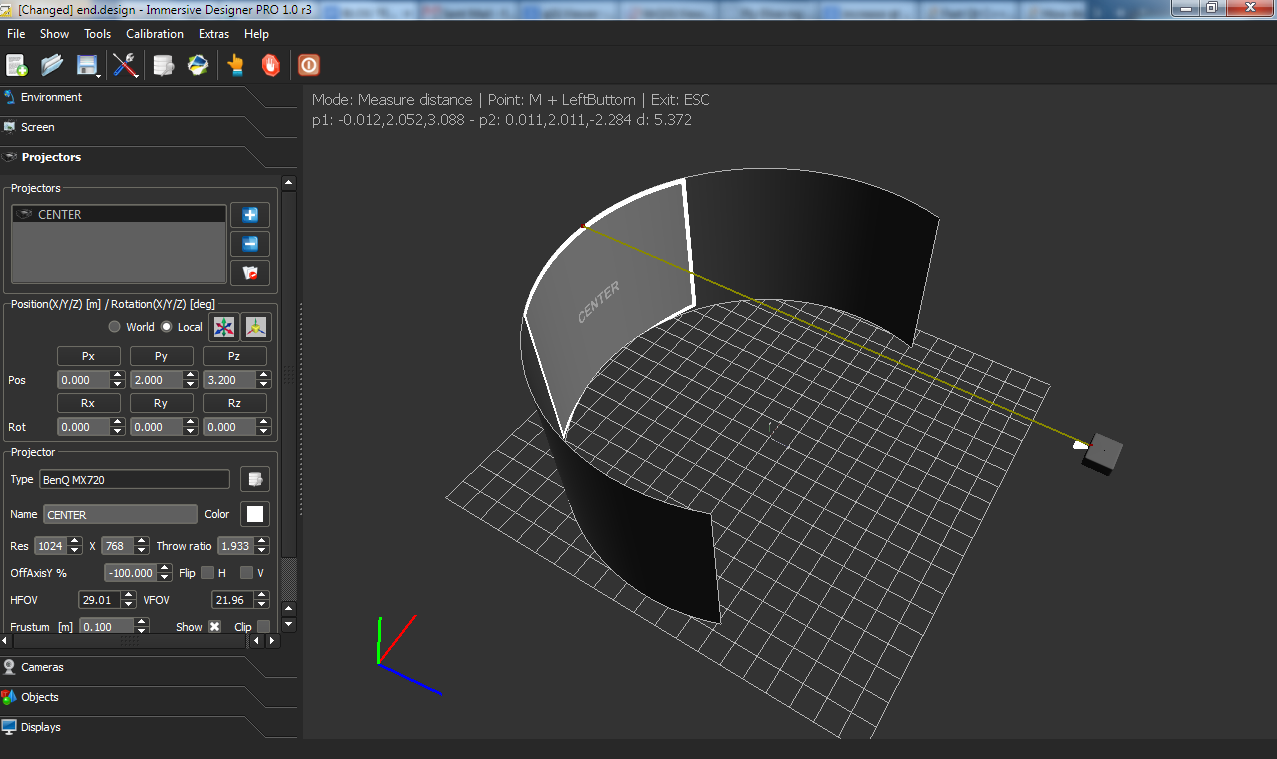 It is clear that we will need a projector with much smaller throw ratio. Let’s select BenQ MX822ST which has a throw ratio of 0.65. We can see that this projector positioned on 2.3 meters distance of the screen will cover the screen vertically. 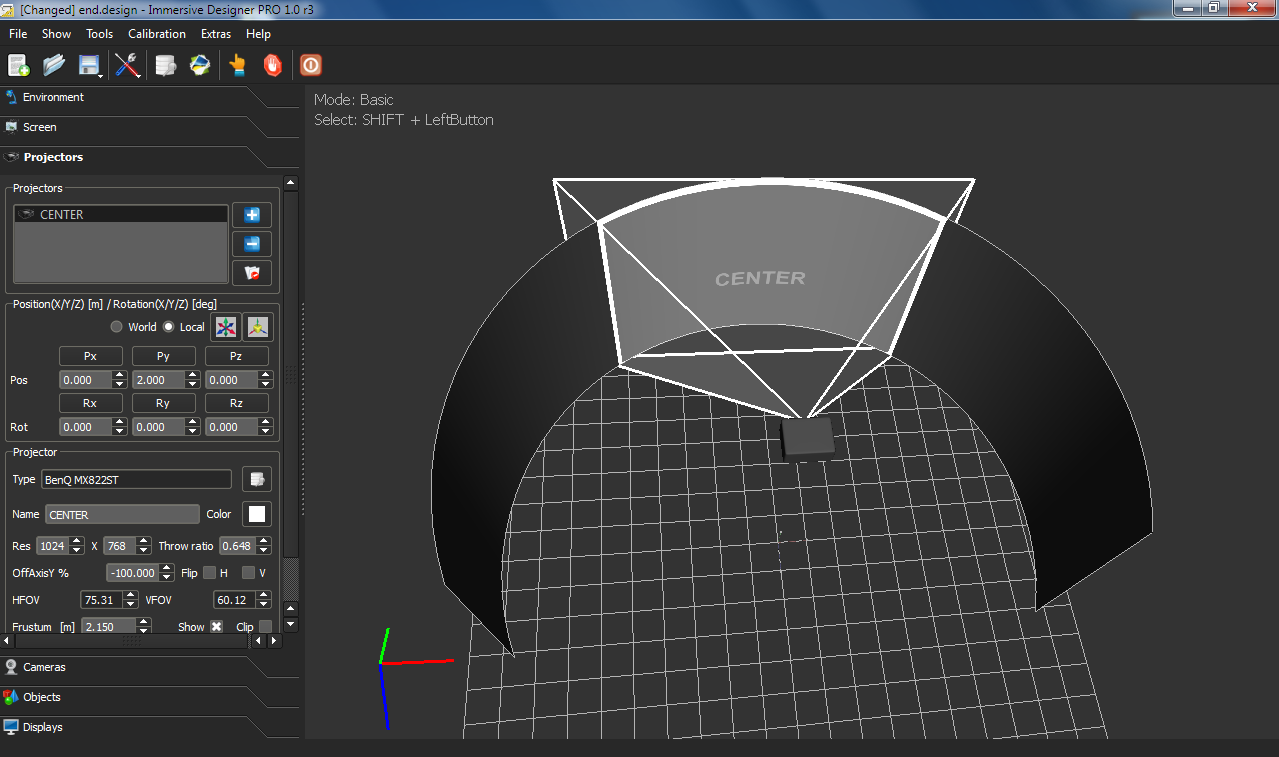 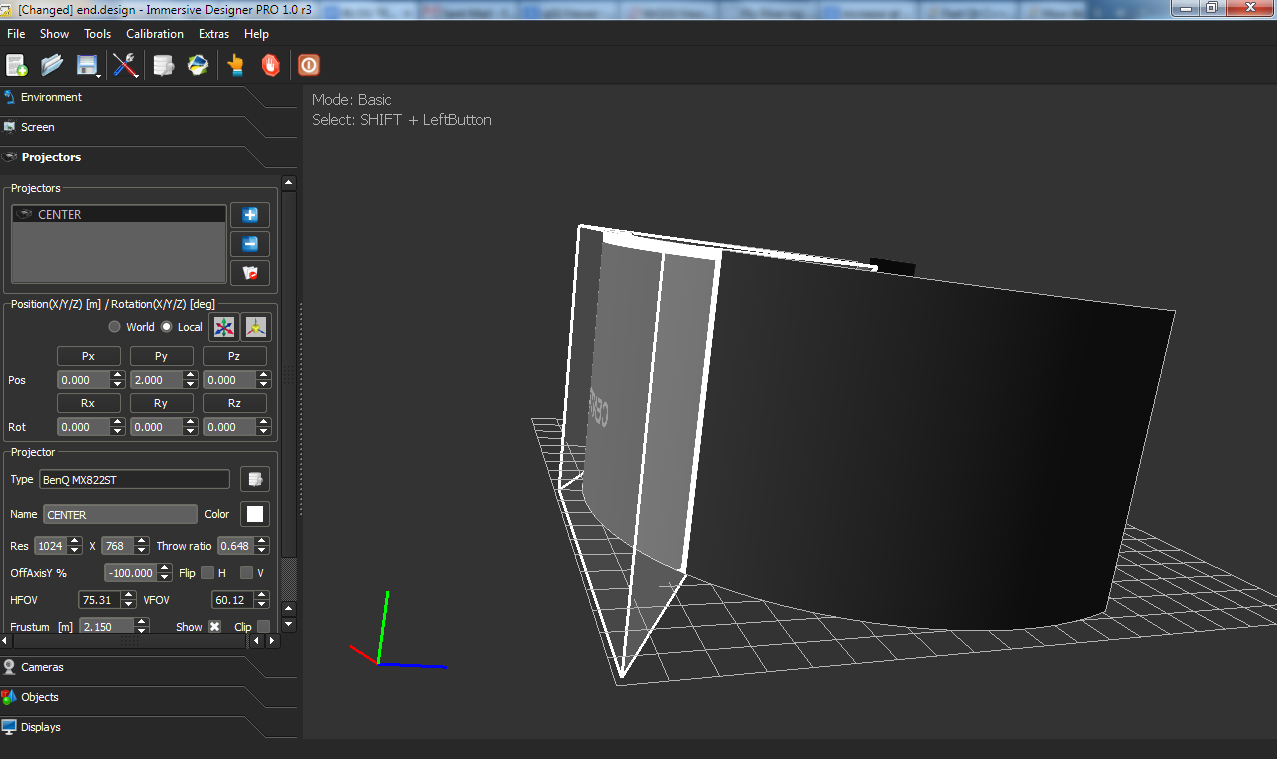 We can see that we need a projector with (wider) aspect ratio to be able to cover the whole screen. Let’s select BenQ LW61ST with of 1280×800, throw ratio of 0.52 and ratio of 16:10. This projector gives us a good image from a distance of 2.3 meters from the screen. This projector is a good basis for the next steps. 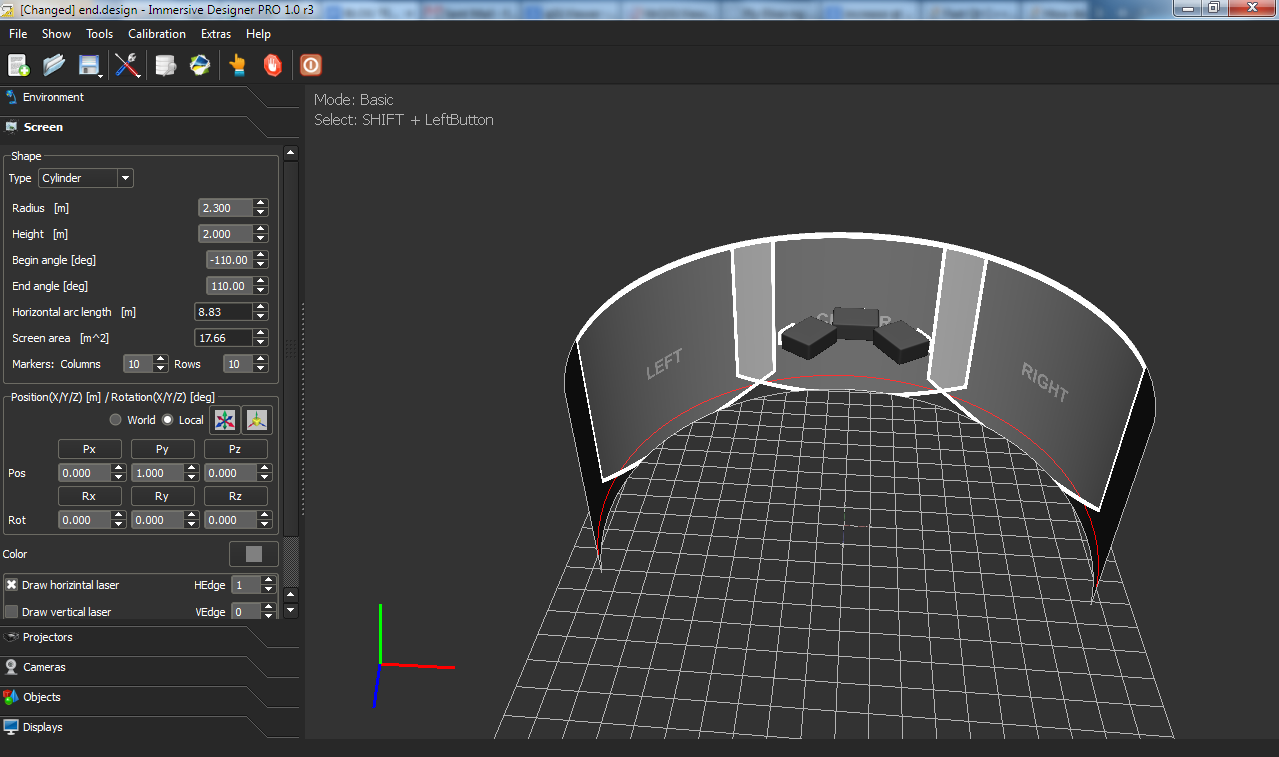 Let’s now add 2 more projectors of the same type: the left and the right projector and try to position them in such a way that the projector approximately 10% to 15% overlap at the edges. This overlap is needed for soft-edge blending. Soft-edge blending will be covered in one of the future blog articles.
<img07.png>
We can see that when we mount the 3 projectors the adjust the projectors rotations to achieve the desired overlap we are faced with 2 consequences: The combined projected image does not cover the whole height of the screen, and also that the projected image does not cover the desired screen angle of 220 deg. At this moment we will need to make a compromise and chose either a smaller screen size and angle or go for another type of projector. Selecting a smaller screen size we can end up with a screen angle of 180 deg and screen height of 1.8 meters. 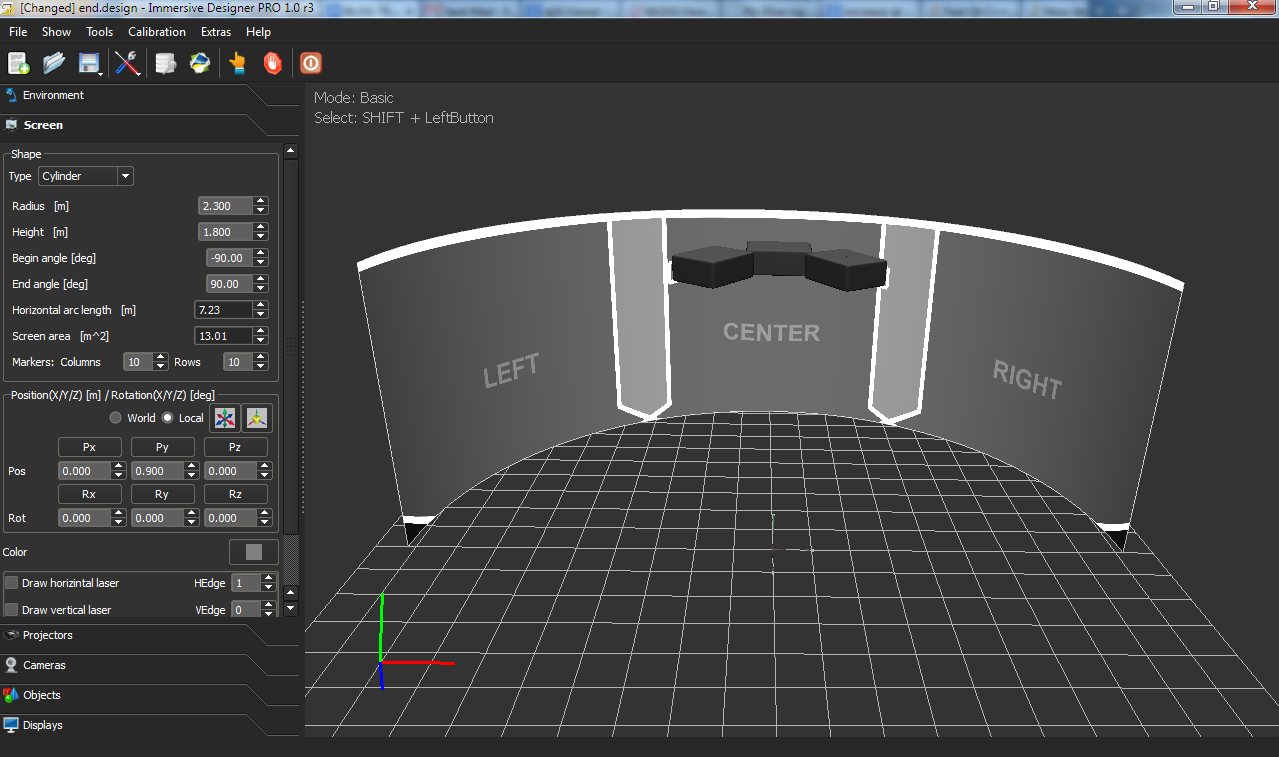 In this we will assume that the screen angle of 220 deg is very important for our setup. We will try to use other projector types and evaluate if we can still achieve this. Let’s select projector type BenQ MP780 ST+ with of 1280×800, ratio of 0.46. 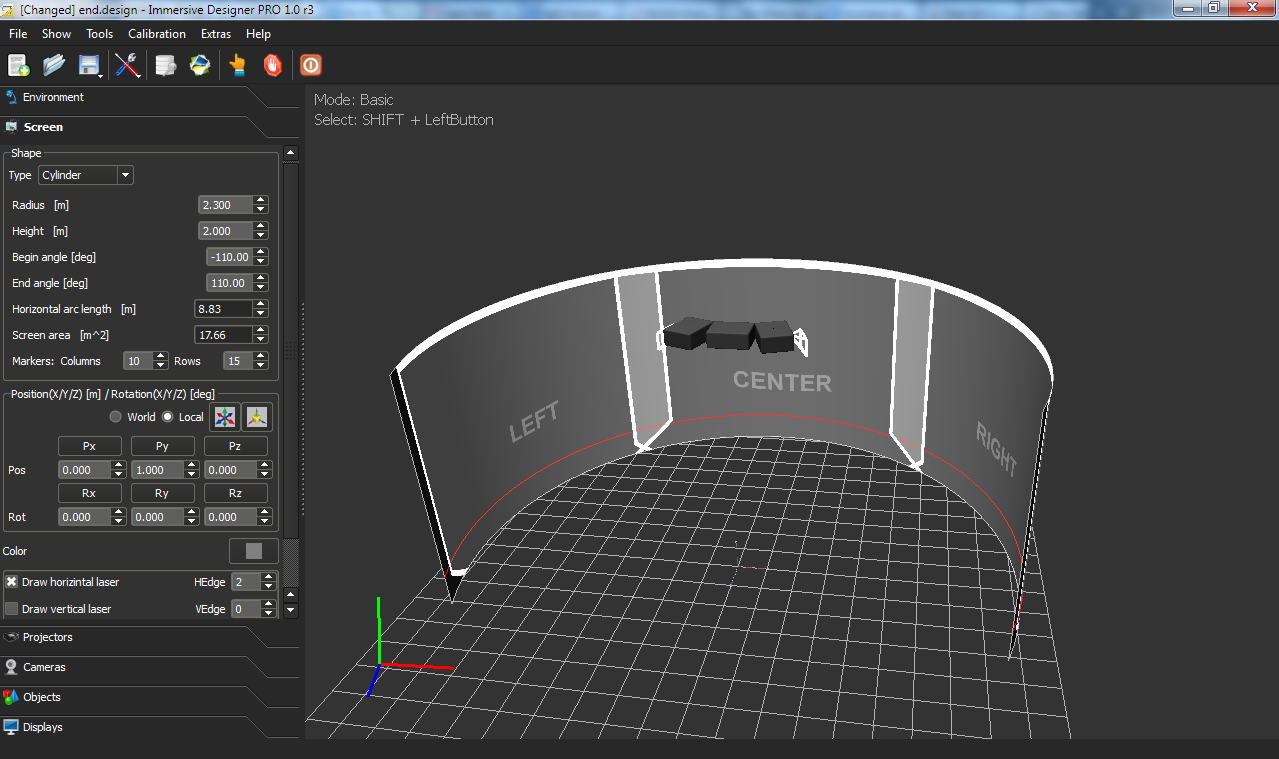 When the projectors positioned to achieve the desired overlap we can see that we are approaching very closely our goal for the projection screen size. However, not the whole projection screen is covered in width and height. At this moment we can compromise on the screen height and angle without diverging too much from our initial goal. In this case a screen height of 1.8 meters and angle of 210 deg will match the projectors coverage 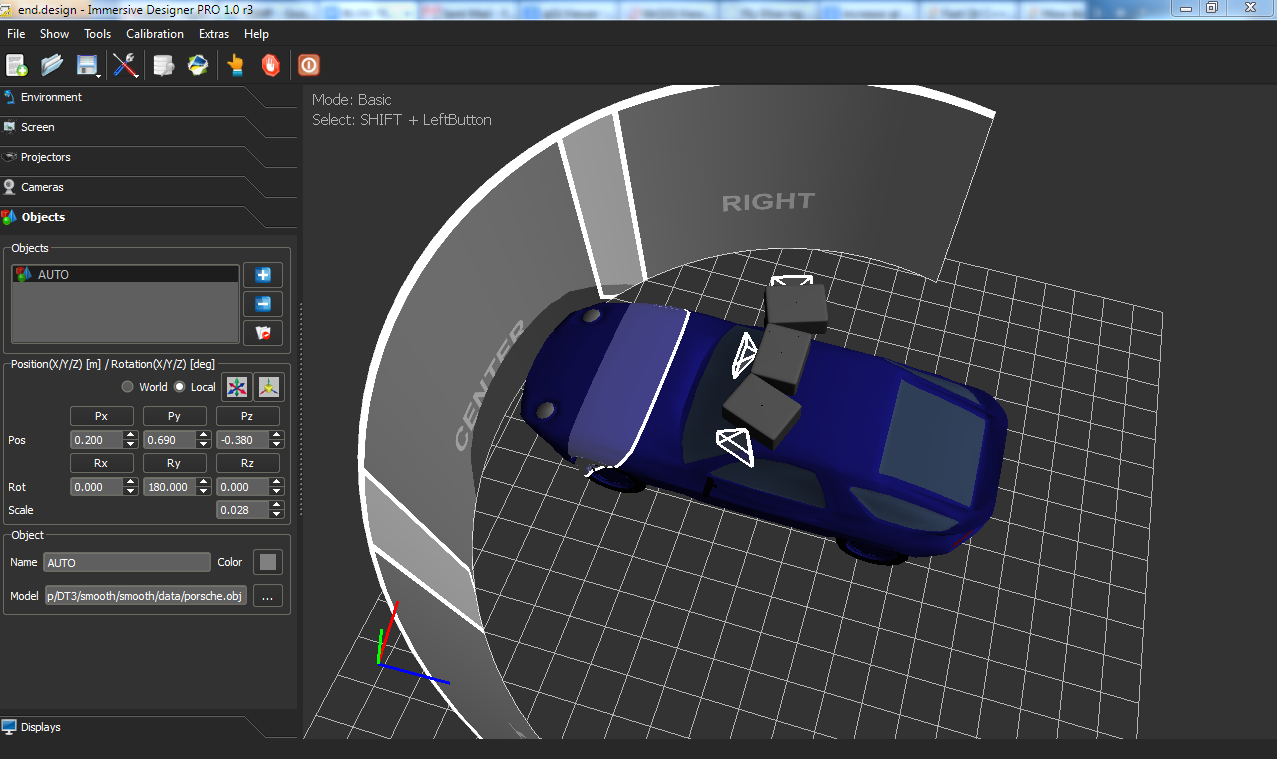 In order to the we will move the car mockup to the back. The eyepoint of the driver is still close to the focus point of the screen. 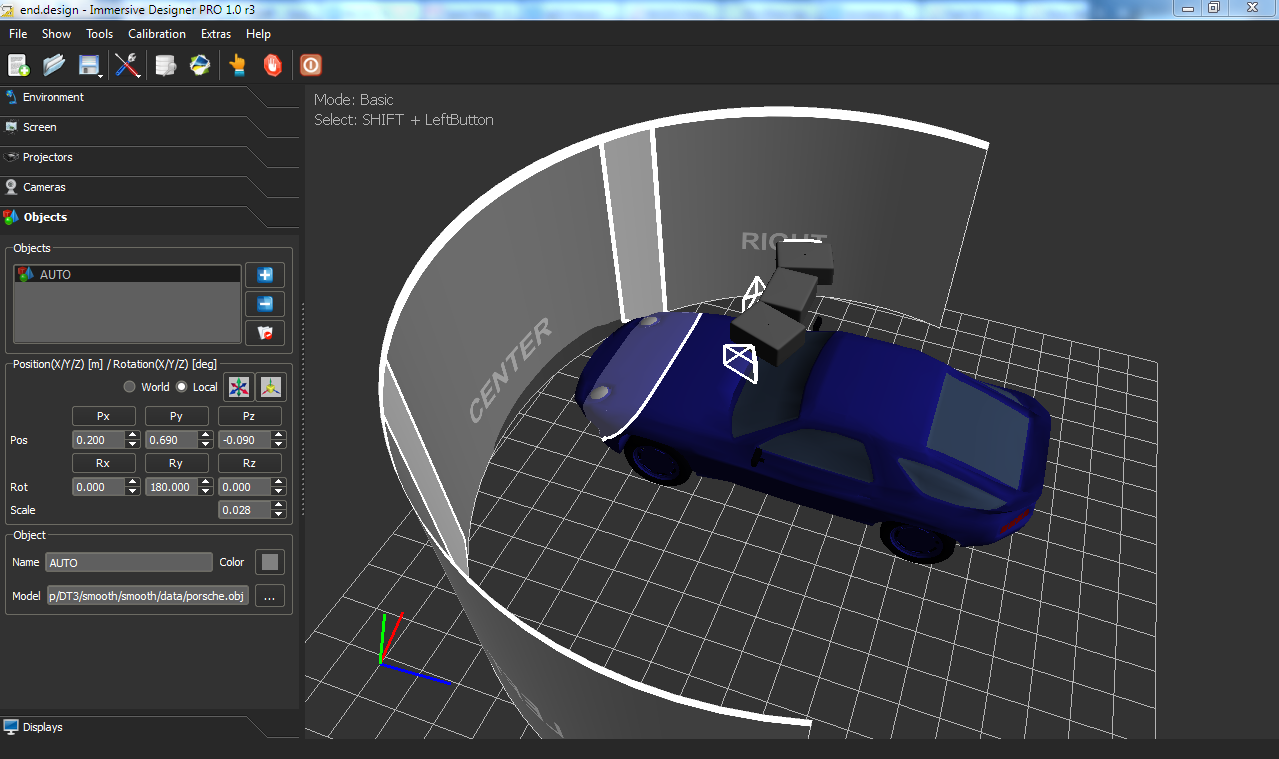 Part of the projected image is on the engine hood. This part of the image can be masked late using Immersive Display PRO masking features.
With Immersive Designer you can do all those tasks and choices and immediately and visualize and evaluate the effects in real-time. You will need to invest some time in order to design your setup and make sure that the design is based on the right choices taken during the design process.
After the design is finished we can build the projection setup being sure that the built setup will exactly resemble the designed setup. After we can use Immersive Display PRO and optionally Immersive Calibration PRO to calibrate the projection for seamless image and soft edge blending from all projectors on the screen. 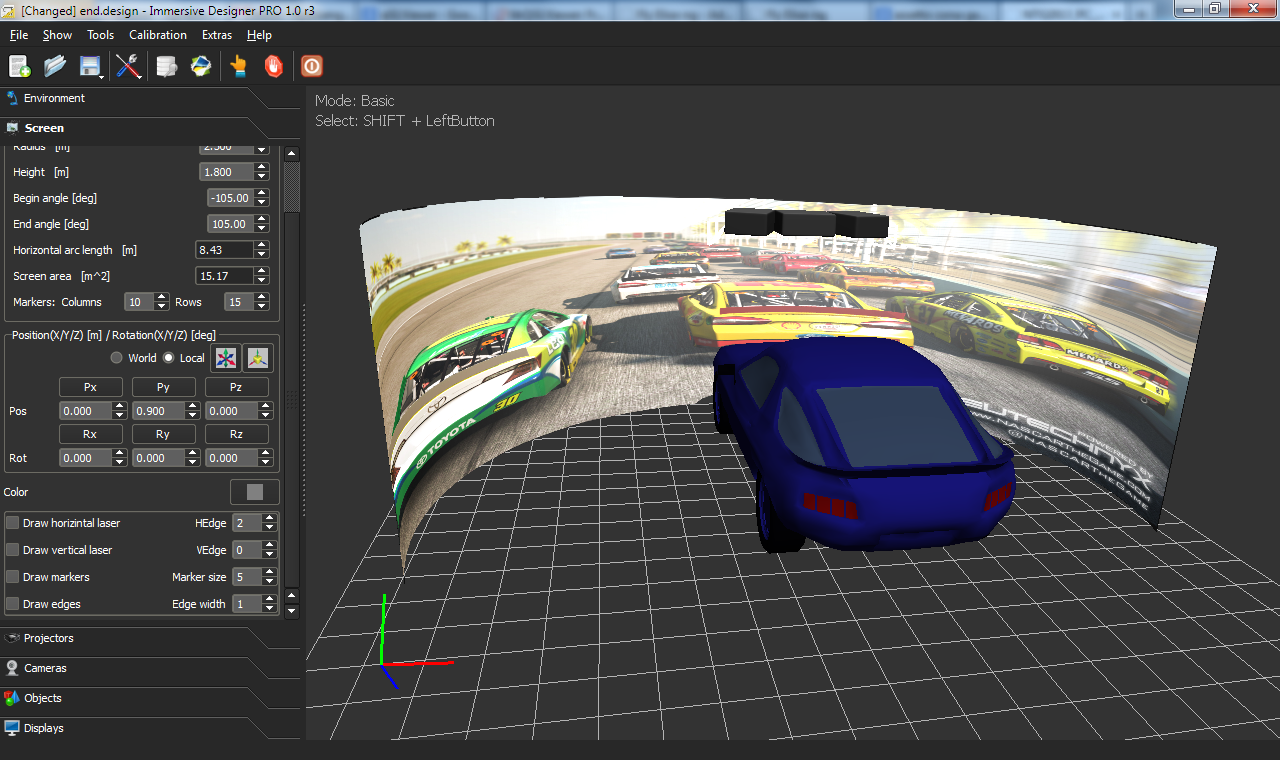 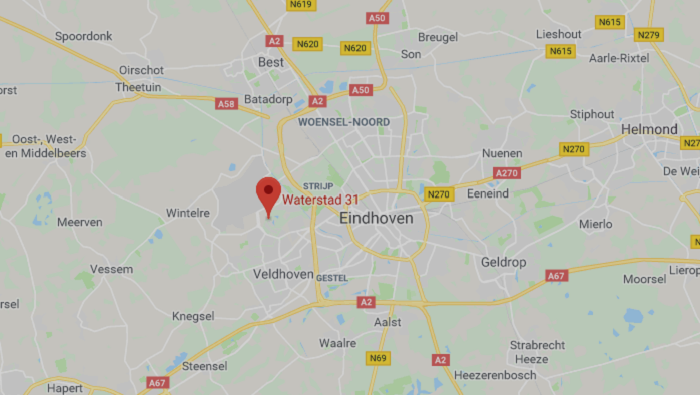